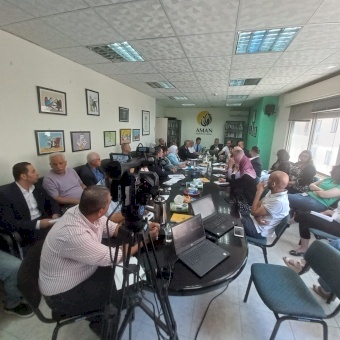 In a session to discuss Draft Report on Health Insurance Reform,

Ramallah – The Coalition for Accountability and Integrity (AMAN) held a session to discuss a Draft Report on Health Insurance Reform. Reforming health insurance is a necessary entry point to reform the Palestinian health sector and secure the right to health to all citizens. AMAN called for adopting a universal, mutual, and mandatory health insurance system. An independent institution will be incorporated to manage health insurance as an imperative to establish a fair health system and provide universal health coverage, including quality, sustainable, and affordable health services to all citizens without discrimination.

Opening the session, Jihad Harb, Senior Researcher at AMAN, explained that the report aimed at examining the policies, procedures, and measures taken by the government and Ministry of Health (MoH) to reform the Palestinian health sector in general, and health insurance scheme in particular. To this avail, the report identifies gaps, outlines challenges, and comes up with effective recommendations that help decision makers to regularise the current situation.

In his presentation of the report, Ibrahim Abu Hantash, a researcher, reviewed the challenges to developing the Palestinian health sector. Most notably, demand for MoH services has steadily increased. Developing and sustaining medical services is dependent on foreign aid, undermining the capacity for, follow up on, improved efficiency of primary health services.

In the session, participants highlighted relevant provisions of the Health Insurance Law No. 20 of 2004. Namely, the MoH is tasked with providing health insurance to the population to the best of its ability. At the same time, many decisions of the Council of Ministers have regulated the health insurance system, giving the impression that health insurance management is governed by reactions. It is not premised on an informed examination or criteria and a mechanism for public health coverage. There is no clearly defined strategy to develop health insurance, ensuring universal access and equality among citizens. Of note, having monitored violations, the 2016 report of the State Audit and Administrative Control Bureau stated that the “health insurance management was abused, causing undue financial losses and allowing room for an unchecked and unfair use of health insurance.” This all adds up to the likelihood of suspicions of corruption due to current mechanisms and indicators.

Human interference, suspicions of favouritism by officials, and exceptions

Towards 2020, some ILS 800 million of debt was owed by the government to private hospitals

The steady rise in patient transfers portends a significant dilemma and increases the likelihood of a declining health sector due to mounting financial strain and decreasing resources and appropriations to the MoH. Increase in the volume of debt owed to Palestinian private hospitals, to which the MoH transfers patients, represents a problem for these hospitals, patient transfer process, and health insurance system. Towards 2020, the accumulating debt of private hospitals was estimated at ILS 800 million.

Unanimous demand for a universal and mandatory health insurance system

Discussants stressed recurrent demands by AMAN and other institutions for a universal health insurance system as an essential step to put in place a fair health system, which provides health services to everyone. That is, this system will provide universal health coverage, including quality, sustainable, and affordable health services to the entire population without discrimination. High costs will not be charged from households, leading to their impoverishment. All citizens, including disadvantaged and vulnerable groups, have the right to health services through health insurance. Relevant authorities, such as the Ministry of Social Development (MoSD), will pay subscription fees to the MoH on behalf of these groups.

MoH role should be confined to regulating the health sector only

The audience debated the importance of incorporating an independent commission or institution for health insurance management, separately from the MoH. The latter will continue to serve as the supervisory body, which develops and elaborates national health policies. The Prime Minister, Minister of Health, and President are called on to refrain from making decisions or issuing instructions to the Service Purchase Department to grant exemptions or use exceptions for patient transfers. Persons will no longer be relieved from paying health insurance fees or covering contributions to medical treatment by the insured unless the cost is covered by an earmarked budget. In other words, coverage will not be at the expense of the insurance fund resources.

Tax justice as an entry point to health insurance reform

AMAN also called for reforming the taxation system with a view to achieving tax justice. In addition to maintaining disadvantaged and vulnerable groups, the burden of people with high incomes will be increased. The proportion of health insurance subscriptions will be determined depending on income. Israeli hospital bills deducted over the past years will be audited. On an ongoing basis, invoices and funds deducted from clearance revenues will also be audited and reconciled. Officials will be held to account for negligence and omission in this regard. Furthermore, patient transfers issued by the Military Medical Services will be audited and reviewed. The cost of patient transfers made by Military Medical Services to Israeli hospitals will be posted to the Military Medical Services budget.

In his comment, Dr. Suleiman al-Ahmed, Director of the Directorate General of Health Insurance, commended the computerised health insurance system, which manages the mechanism for issuing health insurance. The programme has eliminated potential human discretion or exceptions. It provides clear, regular, and hierarchical procedures. Al-Ahmed made clear that the registration process has been under control. The programme can accommodate any new categories of insurance. Financial flows have also been controlled. Through subscriptions, ILS 42 million have been collected using the same insurance cards. According to Al-Ahmed, the importance of the programme lies in its connection to relevant ministries. The MoH is collecting information from the Ministry of Interior. Work is underway to link information with the Ministry of Labour in order to upgrade the list of unemployed persons. This should alleviate the financial burden.

In his intervention, Dr. Mamdouh al-Aker emphasised the importance of a political will. Targeting the political system, a strong lobbying campaign will be launched to provide an equitable and fair health system for all. Dr. Al-Aker agreed that the MoH role should be limited to regulating the health sector only. A national system (one-stop shop) will be established to deal with all health components (service providers, including the government, UNRWA, civil society, and private sector). This should be based on competition to ensure higher quality in terms of service delivery and price, ultimately serving to localising health services.

Importance of realising the principle of social justice in health insurance

Dr. Saleem al-Haj Yihya, Dean of the Faculty of Medicine at the Hebron University, stressed the importance of the principle of social justice in health insurance. This is the baseline of any service provided by the MoH. Highlighting the specific nature of Palestinian society, Palestinians cannot import a health insurance system from another state.

Dr. Yihya agreed that health insurance be outside the purview of the MoH. Health insurance cannot be excluded from the health sector reform. Public confidence in the health system needs to be bolstered. Primary health care will be institutionalised. Serving as the guardian of medicine, family medicine will be provided as a national, humanitarian, and insurance-oriented demand. Eighty percent of diseases and disorders are treated by initial diagnosis. This will be beneficial to society, particularly residents of remote villages, refugee camps, and those who cannot access city centres for medical attention.

Dr. Yihya stated that patient transfers should be limited to purely humanitarian cases. A committee with clearly defined criteria will be in place. Funds will be invested in constructing vertical infrastructure for hospitals, which can eventually provide tertiary health services. Dr. Yihya proposed that focus be placed on a single hospital in the West Bank and another in the Gaza Strip. Indicating that an investment proposal was already delivered, Palestinian skilled medical staff abroad will be encouraged. Emphasis should be on integrating the public and private sectors. Dr. Yihya was in favour of the idea of supporting medical staff and reducing operating costs, not vice versa.

Dr. Fathi Abu Mughli, former Minister of Health, stressed the importance of a universal health coverage in order to realise the right to health for all citizens. Dr. Azmi Shuaibi, Consultant to AMAN’s Board of Directors for Anti-Corruption Affairs, highlighted that the idea of mutual health insurance should be translated into reality in consistence with the government’ sustainable development plan. Including all people, this idea reflects faith in the human being as the focus of interest. Abed Ghazal emphasised that a law on health insurance was a legal, social issue, calling for a broad national dialogue about the findings of health service localisation committees. “A health system will not be set right without a law,” Ghazal concluded. 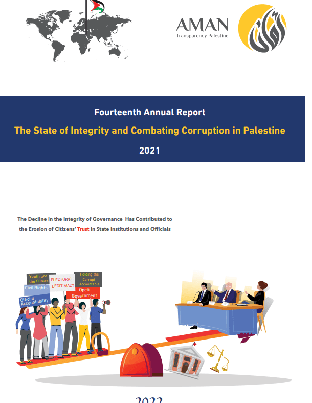